The Emerging Greater Cambridge Local Plan is progressing following the release of a report by Cambridge City Council on 23 September outlining the proposed Issues and Options consultation due to be undertaken. The Regulation 18 consultation is due to run from 25 November until the end of January 2020, dependent on agreement by both Cambridge City and South Cambridgeshire Councils in October.

Furthermore, Greater Cambridge has also launched a consultation on the updated housing trajectory and five-year housing-land supply, covering both Cambridge City and South Cambridgeshire. This consultation is currently open and will run until 17:00 on 14 October.

Following a vote by Fenland’s Cabinet on 18 September, members have decided to approve an Issues and Options consultation for the emerging local plan. This consultation is due to take place mid-October and will be open for 6 weeks. Dates are to be confirmed in the coming weeks.

On 20 September, Broxbourne Council published the Sustainability Appraisal of Main Modifications to its Emerging Local Plan, following the Inspector’s recommendations. As such, the Council will open main modifications to public consultation, due to be held from the 8 October and will last 6 weeks.

The Three Rivers New Local Plan is due to be presented to the Extraordinary Planning and Resources Committee on 7 October to gain approval from members to initiate a Regulation 19 Submission Draft Local Plan consultation. This consultation is expected to be held towards the end of November 2019, with dates still to be determined.

As of 27 September, Watford Borough invites representations from the public and interested bodies to be made on its First Draft Local Plan, alongside its supporting Sustainability Appraisal and Policies Map. This 6-week consultation will feature the Council’s preferred development strategy and will run until 8 November.

The Forest Heath area Single Issue Review (SIR) of Core Strategy Policy CS7 and Site Allocations Local Plan (SALP) documents were formally adopted as statutory planning policy following the meeting of West Suffolk District Council on the 19 September 2019. The SIR and SALP Local Plan documents now form part of the Council’s Local Plans and supersede the saved policies in the Forest Heath Local Plan 1995. A list of those policies which have been superseded is available in Appendix 4 of the SALP. 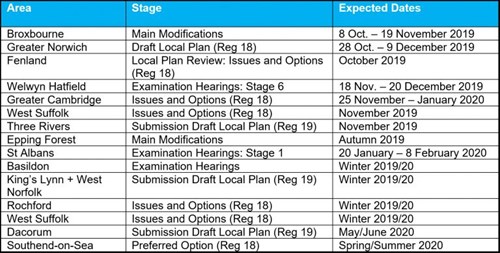 Lanpro are pleased to welcome Sarah Clinch as Associate Planner, Dean Starkey as Planner, and Maryam Ahmedi as Urban Designer to our company.

Sarah formerly worked for White Young Green in London where she advised clients on development across London, the South East and the East of England. Sarah has experience in delivering a wide range of urban and rural planning projects ranging from small scale developments with complex planning issues to the creation of garden village developments and tall buildings in central London.

Dean joins us from Brown and Co. and is a graduate of the University of Sheffield after completing a four-year integrated master’s degree in Urban Studies and Planning. He is a Licentiate member of the Royal Town Planning Institute (RTPI) and is working towards achieving Chartered Membership in 2020. As Planner, Dean will support the  business on a wide array of projects whilst leading on smaller-scale planning applications.

Maryam has joined Lanpro’s urban design team in Norwich having previously worked at Brown & Co. as urban designer/masterplanner. Maryam has a broad portfolio from her extensive academic experience, culminating in a PhD degree in Architecture and Urban Design from Nottingham Trent University, and her industry experience, where she has worked on projects including healthcare, retail and urban design, including the Honingham Thorpe 7,500-home residential development scheme in the Greater Norwich Area.

Lanpro have been commissioned by Gresham’s School in Holt to provide planning, heritage and landscaping consultancy services for the Schools’ proposal for the demolition of existing buildings and the provision of new state of the art teaching facilities relating to Science, Technology, Engineering, Art and Maths (STEAM). Lanpro worked closely alongside architects WilkinsonEyre and project managers Daniel Connal Partnership, coordinating the planning submission whilst actively promoting the School’s need case and the project’s significant benefits to both pupils and wider community through delivery of a new multifunctional teaching and learning space that will be actively promoted for community/educational use outside of school hours. The application has been submitted to, and validated by, North Norfolk District Council.

Lanpro have submitted an outline planning application for the development of 30 dwellings at Station Road, Docking, in the Borough of King’s Lynn and West Norfolk. The proposed development is situated on brownfield land currently occupied by the vacant former commercial buildings of Limagrain UK. Lanpro were instructed to provide planning, urban design, and heritage services as part of this application, which has now been validated by the local planning authority.

For more information, please do get in contact. Within the East of England, we also monitor Council’s 5-year Housing Land Supply Position, and the progress of Neighbourhood Plans.