Examination Hearings are taking place on the emerging SCDC local plan throughout August and September.  The Inspector has produced a draft Programme of Matters to be dealt with. Lanpro are likely to be appearing in respect of Tourism Development and Development in the Area of Outstanding Natural Beauty.

On the 24 July 2019 the Peterborough Full Council committee held a meeting and approved the local plan. This statutory document sets out the overall approach to development in Peterborough to 2036 and beyond.

Following the Call for Sites 2019 consultation that ran until 24 June 2019 provisional dates for Stage 6 hearing sessions have been published. The dates area as follows:

On the 23 July 2019 the Policy and Resource Committee made amendments to Regulation 18 draft local plan primarily due to the addition of new sites. Further consultation dates are to be confirmed but are expected to be mid-August until early October 2019.

West Suffolk updated the Affordable Housing SPD which will ultimately replace the current SPD adopted in 2013. The Consultation on the document will open on 29 July until 30 September 2019 at 4.

“West Suffolk Council have produced an updated West Suffolk Affordable Housing SPD which will ultimately replace the current SPD adopted in 2013. The document will not be a part of the formal development plan for West Suffolk, but it will inform and be a material consideration in the determination of planning applications and will provide advice to developers and registered providers (RPs) on the council’s approach to affordable housing provision.”

RGS Worcester have appointed Lanpro to provide planning and heritage advice on two significant sports facility projects in the City. One involves the provision of a new tennis facility and the other a national standard Hockey facility. Lanpro are working with The Raise Partnership on the schemes, who are the Project Managers. This follows on from the Perdiswell Leisure Centre Project in Worcester that Lanpro recently provided planning and landscape services on.

Lanpro has secured planning permission on appeal for a 252-bedroom purpose-built student accommodation in Norwich City Centre. Lanpro successfully argued that the scheme design would not cause harm to the Conservation Area or nearby heritage assets and limited harm to the amenity of neighbouring residential properties. The scheme will meet an identified need for student accommodation as evidenced by Norwich City Council which will help to release family housing back into the private market. The development will also deliver a long-held aspiration of the City Council to have a pedestrian connection between Queens Road and Surrey Street which helps to provide a more direct link between this part of the City and the train station.  The Inspector concluded that the development would be of social and economic benefit and that any harm would not significantly and demonstrably outweigh these benefits.

Lanpro has secured planning permission on appeal for the construction of 2 no. single storey dwellings at The Grove in Holt. The Grove is a Grade II Listed Building. Lanpro successfully argued that the development would not cause harm to the nearby heritage asset and there would be limited harm from the proximity of existing trees to the amenity of future occupiers. The design of the dwellings was found to be appropriate and sympathetic to The Grove and the Inspector stated that “the simple contemporary design would not compete for attention with the grander detailing of the listed building.”

Lanpro’ s planning, design and heritage teams worked on the project grappling with the combined constraints of proximity to heritage assets and TPO trees. Overall, the Inspector concluded that the development would preserve the setting and special interest of The Grove and would have an acceptable effect on trees with regards to the character and appearance of the area and the living conditions of future occupiers.

As alerted to you in our June newsletter, Norwich City Council Planning Officers have received permission from their elected members to consult on a new guidance note for student accommodation developments. If you want to make comments on this, they need to be submitted by 11 August 2019. 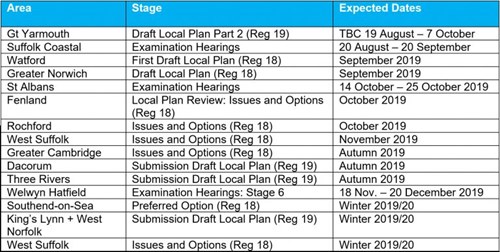 For more information, please do get in contact. Within the East of England, we also monitor Council’s 5-year Housing Land Supply Position, and the progress of Neighbourhood Plans.